Sparxell has won the Chris Abell Postdoc Business Plan Competition 2022, securing the £20,000 first prize for their sustainable pigments, designed to create the next generation of colours and effects.

Second place went to Powersense, who were awarded the £10,000 prize for their intelligent operation and maintenance platform for renewable energy. The third prize of £5,000 was awarded to social enterprise autohaem, developing affordable, sustainable automated blood smear preparation for diseases such as malaria. 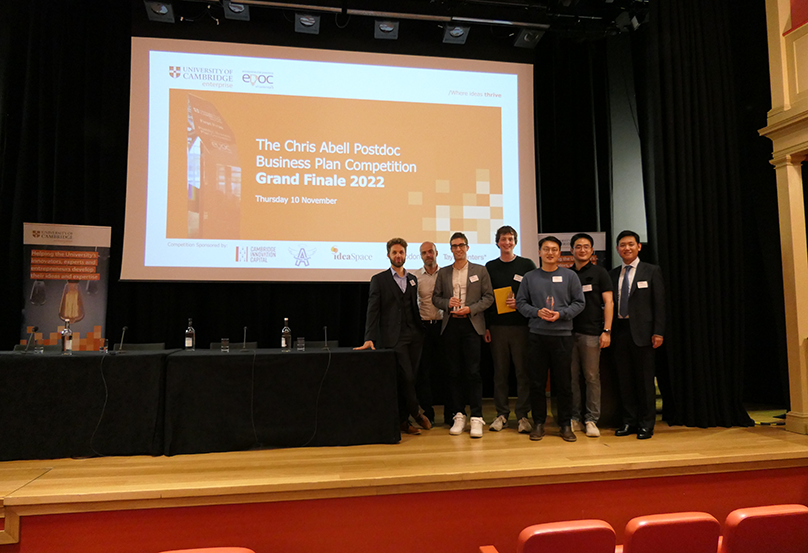 Now in its eighth year, the competition has become a highly respected part of the Cambridge entrepreneurial calendar. Since its inception, the competition’s finalists and semi-finalists have gone on to raise more that £70 million for their companies. This year’s Grand Finale, held in the Howard Theatre within Downing College, attracted attendees from across the University and wider ecosystem. The six finalists presented five-minute pitches on stage, discussing their business idea, the problem it tackles, the business proposition and the market. In addition to the three winning projects, the finalists included:

Lessons from a journey, Land’s End to John O’Groats

As the judges conferred, Professor Andy Neely, Senior Pro-Vice-Chancellor for Enterprise and Business Relations, took the stage. Likening the entrepreneurial journey to an actual one, he shared some insights gleaned on his cycling trek from Land’s End to John O’Groats. The trip raised money for the British Heart Foundation and was inspired by his friendship with the late Professor Chris Abell, for whom the competition is named.

Neely said the 1,550 mile trip was the equivalent of two Everests climbed, a daunting prospect. ″Every day we just did a little bit more and got closer and closer to the destination” he said. ″That analogy lends itself quite fittingly to the journey of an entrepreneur: every day just doing a little bit more, getting a bit closer to your end goal.”

The second lesson, he said, came after reviewing pictures from the trip. ″The overriding thing for me was the photos of us smiling,” he said. There will be exhausting and difficult periods in an entrepreneurial career, but ″keeping smiling is important.″

And finally, Neely applauded the helpfulness of strangers as one of the things that makes the Cambridge ecosystem special. ″People are incredibly generous with their time; they’re willing to support and help anybody as they try to make a difference”. He thanked those involved in entrepreneurship across the Cambridge ecosystem for making sure that the fantastic ideas coming out of the University are having real impact on the world.

Neely concluded by asking competition entrants to ″remember that journey from Land’s End to John O’Groats. Even if you don’t win tonight, even if you don’t get to the top of tonight’s hill, keep going on your own journeys″. Finalists and semi-finalists who don’t win one of the monetary prizes often take the knowledge gained in the competition to other settings and prevail.

The audience also heard from previous winners Gita Moghaddam Khalili, founder of GlycoVue (now iVUE), and Alexander Justin, Founder of Cambridge Conduits. They each echoed the same benefit of gaining access to business experts and mentors—part of the competition offering—who gave honest and critical feedback that helped sharpen their business ideas.

The competition is run by Cambridge Enterprise and EPOC, and this year was sponsored by Cambridge Innovation Capital, ideaSpace, Oxbridge Angels, Start Codon and Taylor Vinters.

We would like to thank everyone who helped to make this year’s competition such a resounding success, including the sponsors, entrants, mentors, judges and attendees of the Grand Finale.

If you missed the event, or simply want to revisit it, listen to the Chris Abell Postdoc Business Plan Grand Finale 2022 episode of the Cambridge Tech Podcast from Sunday 13 November.

The Chris Abell Postdoc Business Plan Competition gave me the opportunity, with the help of the different mentors, to refine my business plan and bring it to a state where I can now confidently present it to potential investors. I am very excited that the judges selected Sparxell for the first prize as this will support our take-off as an independent start-up.