“It has been my great pleasure to have worked with Sir Keith over many years, and he brings a breadth of knowledge that will benefit Cambridge Enterprise and the University of Cambridge for years to come,” said University Vice-Chancellor Professor Sir Leszek Borysiewicz. “We are delighted to welcome him back to Cambridge.”

It has been my great pleasure to have worked with Sir Keith over many years, and he brings a breadth of knowledge that will benefit Cambridge Enterprise and the University of Cambridge for years to come.

Sir Keith held a Royal Society Research Chair at Cambridge from 1979 to 1995. He joined Imperial College in July 2008 and was appointed as Rector in January 2010. 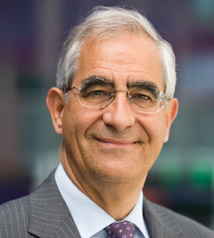 Among his other roles, Sir Keith served as the Director General of the UK’s seven Research Councils where he managed an annual science budget of £4 billion and developed the UK science and innovation policy and strategy.

He was Chief Scientific Adviser for the UK Ministry of Defence, was Head of Earth Sciences and Professor of Physics and Chemistry Minerals at the University of Oxford and was Director General, Science and Innovation in the Department for Innovation, Universities and Skills.

Sir Keith received a Knighthood for services to Earth Sciences in the 1999 Queen’s Birthday Honours and was elected a Fellow of the Royal Society in 1983.

“I am delighted to be joining Cambridge Enterprise as its Chair,” said Sir Keith. “This area of activity is one of increasing importance to universities and one where Cambridge has been so prominent and successful.”

Benthall will continue as Chairman of Cambridge Innovation Capital, launched in 2013 with £50 million of capital to invest in early stage technology companies emerging from the University or the Cambridge Cluster.

A former partner at Charterhouse Capital Partners, a private equity firm based in London, Benthall is an active participant in the Cambridge business angel community through his membership of the Cambridge Capital Group, and a key supporter of the University of Cambridge Discovery Fund, one of three evergreen funds managed by the Cambridge Enterprise Seed Funds team.

Benthall was Chairman of the 800th Anniversary Campaign Council, a group of volunteers whose support for Collegiate Cambridge helped raised more than £1.2 billion.