Checking in with Chemistry 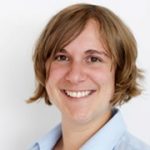 Intrigued by the huge variety of research going on at the Department of Chemistry, we decided to make it our first visit of 2017. So, in late January, Tony and a small group from the Technology Transfer team, headed east to Lensfield Road for a visit.

It would be impossible to visit all of the research groups in the Chemistry Department in one day, so we decided focus on a few representative ones. To kick things off, Tony met with Head of Department Prof John Pyle and Prof Michele Vendruscolo. Michele will be one of the research group leaders based in the new Chemistry of Health Centre when it is completed later this year, along with Prof Tuomas Knowles and Prof Chris Dobson. We were excited to learn more about the £22 million facility, which will house the Centre for Protein Misfolding Diseases. It will also house a Chemistry of Health Incubator, which will provide precious lab space for start-ups. 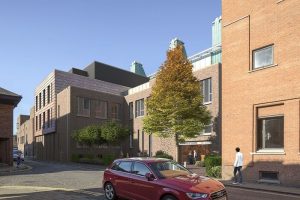 Visualisation of the Chemistry of Health Centre

Having trained as a chemist, I was eagerly anticipating the next item on the agenda: lab visits. First up was the Melville Laboratory for Polymer Synthesis. Prof Oren Scherman led us around the large and versatile space. Prof Melinda Duer then gave us a detailed overview of her group’s work on collagen, its role in the spaces in between cells and what that means for diseases such as cancer. Finally, Dr Tanya Hutter, a postdoc in Prof Stephen Elliott’s group, showed us the group’s new device for detecting very small amounts of gaseous pollutants using adsorption.

The halfway point of the visit was a roundtable meeting for postdocs with Tony. The well-attended session included several interesting questions, including queries about IP ownership, the IP peculiarities of software commercialisation and what constitutes an ‘inventive step’ when patenting a chemical invention. We were delighted by these conversations and will follow up with training sessions later in the year.

The day concluded with several brief talks. Tony described the mission and motivation of Cambridge Enterprise; Dr Yolande Cordeaux described her role as the Department’s Knowledge Transfer Facilitator; our own Julian Peck discussed the services we offer and Prof Chris Abell, Pro-Vice-Chancellor for Research, recounted some departmental spin-out success stories, including that of Aqdot, which he co-founded in 2012. The day was rounded off nicely with wine and nibbles at a networking session, an excellent opportunity to chat to a few more members of the Department.

The day was a huge success, and sincere thanks are due to both Yolande and Klaudia Radini, both of whom were crucial to the organisation and smooth running of the whole day.