Being reliant on those willing to work with the ever-present spectre of failure inevitably means that potentially great opportunities are lost to the world and to patients, long before it can be determined whether there really was a legitimate prospect for generating a new therapeutic. Is it sensible that this is has so much effect on the selection process? It is our obligation to maximise the number of opportunities that come to light by making it much easier and more attractive to develop a therapy based on the insights of ground-breaking medical and biological science.

The challenge is to determine the most efficient and critical path to success and then bring the right resources to enact that plan quickly, effectively and without fear of being one of the majority of projects that will inevitably come to a close. Ending a project at the earliest opportunity is disappointing but it is certainly not a failure, despite the mantra of “fail fast fail cheap”; it is just good practice and efficient deployment of resources. Stopping for the right reasons frees our academic colleagues to do new and exciting things.

The impact for Cambridge researchers lucky enough to work with Apollo will be transformational as they see their science move swiftly towards the clinic with such great support.

To that end, the Apollo Therapeutics Fund, a unique collaboration between three top UK universities and three global pharmaceutical companies that was launched on 25 January, was designed to achieve just that.

The £40m fund will invest in very early stage therapeutic opportunities from the University of Cambridge, Imperial College London and University College London but critically will bring so much more to help academics progress their projects. Apollo is designed around a core drug discovery team (DDT) that, along with their academic colleagues, will build and implement the best possible project plans. The DDT has access to the expertise and leverage of all of Apollo’s commercial partners: AstraZeneca, GlaxoSmithKline and Johnson & Johnson. The Apollo team can and indeed must build the right project and then decide whether to invest within time frames that make traditional translational funds look glacial and disjointed.

But that is only half the story – getting a great project up and running is pointless without a serious mind to an endgame. Apollo-funded opportunities will need to be taken on by companies that have the capacity to take a therapeutic to the market. Apollo’s commercial partners will have great insight, input, knowledge and buy-in to the projects; the crucial hurdles to the in-licensing process will have already been overcome.

Apollo offers industry expertise, pharma muscle, funds, someone else to do the work researchers don’t want to do, a funding decision within months of first engagement, and ready-made customers who can take on early stage opportunity at market-rate. The impact for Cambridge researchers lucky enough to work with Apollo will be transformational as they see their science move swiftly towards the clinic with such great support.

Dr Iain Thomas is the Head of Life Sciences at Cambridge Enterprise. 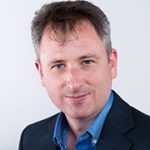